The CCPL is by far the most authoritative and influential event in China’s ceramic industry and has a history of 16 years, which covers sectors including machinery, chemical materials, ceramic tiles, sanitary wares, distributors, and designers.

This year, as the COVID-19 pandemic is still hovering China and the world and social distancing is adopted to curb the spread of the virus worldwide, the 16th CCPL presented a differently brand-new ceremony from the previous years. CTW as the organizer of the event, invited the mainstream media in China such as Nanfang Daily, Guangzhou Daily and the internet giant Tencent to broadcast the event live on line. 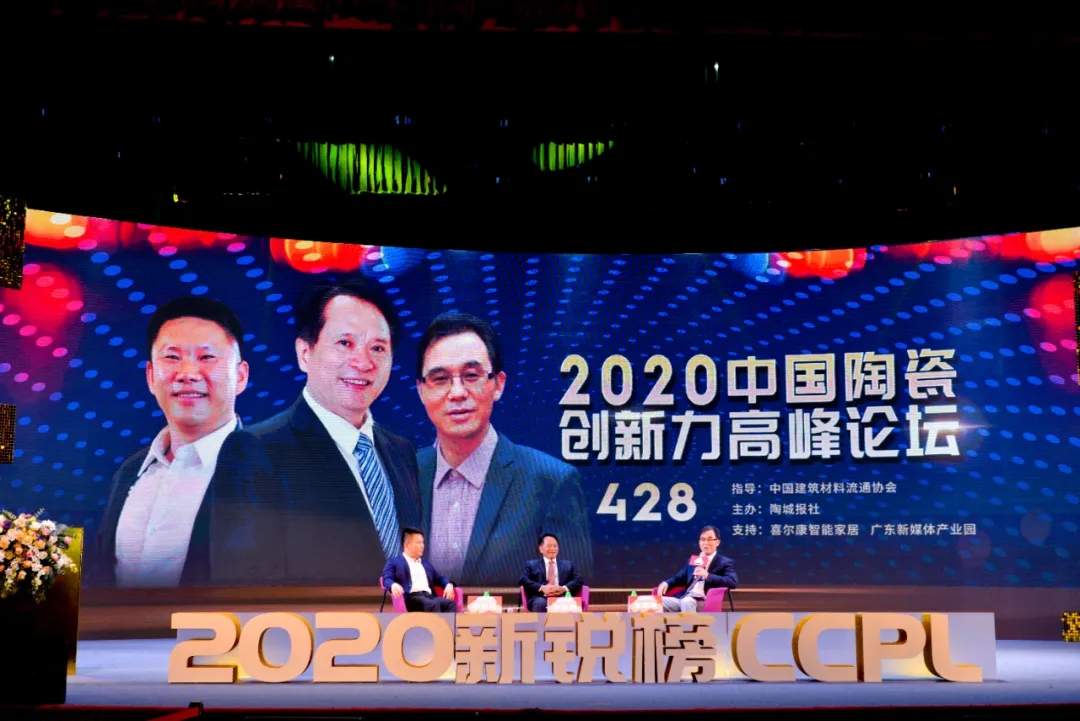 Before the awarding ceremony, the 16th CCPL held a Summit Dialogue on the Innovation of Chinese Ceramic Industry. Mr. He Xinming, President of Dongpeng Ceramics, Mr. Chen Xianwei, Deputy President of Eagle Ceramics, and Mr. Li Xinliang, President of Ceramic Town Weekly, presented an in-depth discussion from the perspectives of innovation, the concept of healthy tiles, cross-industry integration, and the change of industrial pattern in China.

Mr. He Xinming said: “In the past 30 year of the reform and opening up, the fast development of the real estate industry brought huge opportunity for the ceramic enterprises in China. However, with more and more competitors entering this industry, brand concentration picks up speed and cross-industry integration has become the trend for the industry. I believe it is good for the development of the industry as resource complementation and sharing can be realized after the integration.” 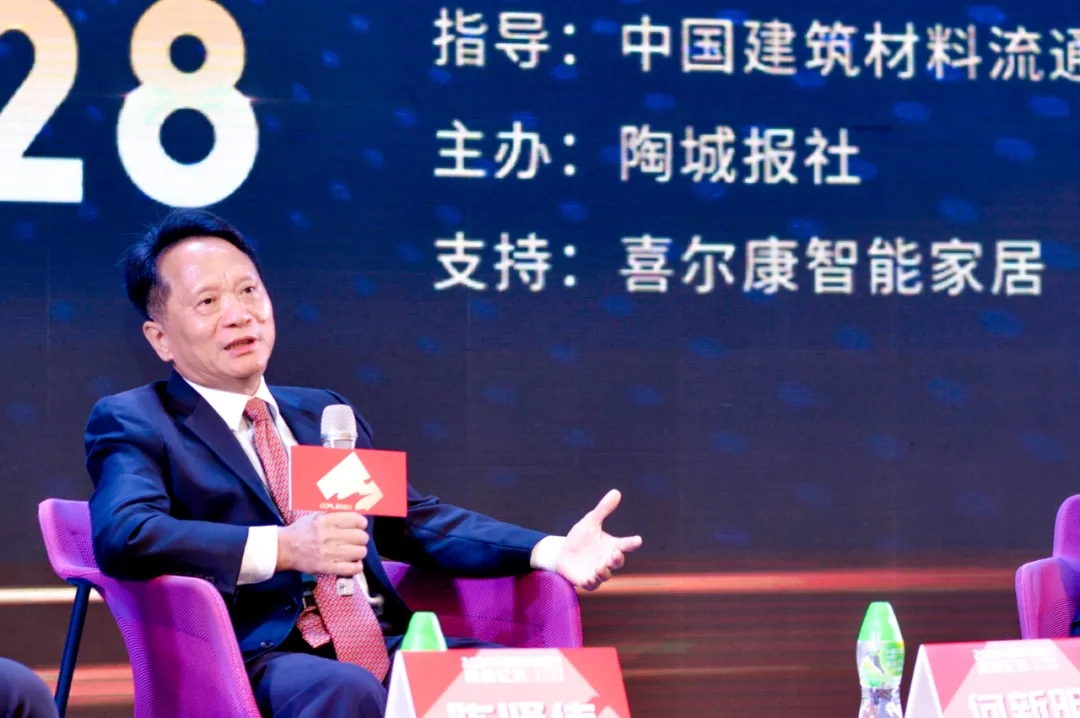 According to Mr. He, there were two major changes after the pandemic in consumers’ demands for ceramic tiles— healthy function and time saving. Based on the reports from some authoritative media, 60% of the consumers regarded health as the priority in their living environment. And as people spent more time at home during the pandemic, how to save time in redecorating their houses became more and more important. Therefore, Dongpeng Ceramics had promoted healthy flooring and healthy sanitary ware in April. “Instead of only hyping the concept of healthy tiles, our products are real with such functions.” said the president of Dongpeng Ceramics.

Regarding the emerge of healthy ceramic tiles especially after the pandemic, Mr. Chen Xianwei commented that the industry was expecting relevant standards formulated for such tiles, for some of the factories deceived the end users by using the concept of healthy ceramic tile without the function. Mr. Chen thus called for more enterprises setting a good example in manufacturing healthy tiles. “Though it will cost money and manpower to promote this, it is an opportunity for us to spur the development of the industry with more value added to the tiles.” said Mr. Chen.

Besides, the two tycoons in China’s ceramic industry also discussed about the change of industrial pattern in recent years. Mr. Chen said that nearly half of the big real estate enterprises would seek financing in the industry’s downstream companies and one of the biggest real state group in China, the EVERGRANDE had sought financing in some ceramic enterprises with well-known brands. In other words, ceramic enterprises have more choices and bargaining chips in the business with real estate companies.

In the end, Mr. He and Mr. Chen encouraged both big and small ceramic enterprises to strive for survival and development. “Firm efficiency and sustainable profitability are crucial for enterprises to survive the winter.” said Mr. He. 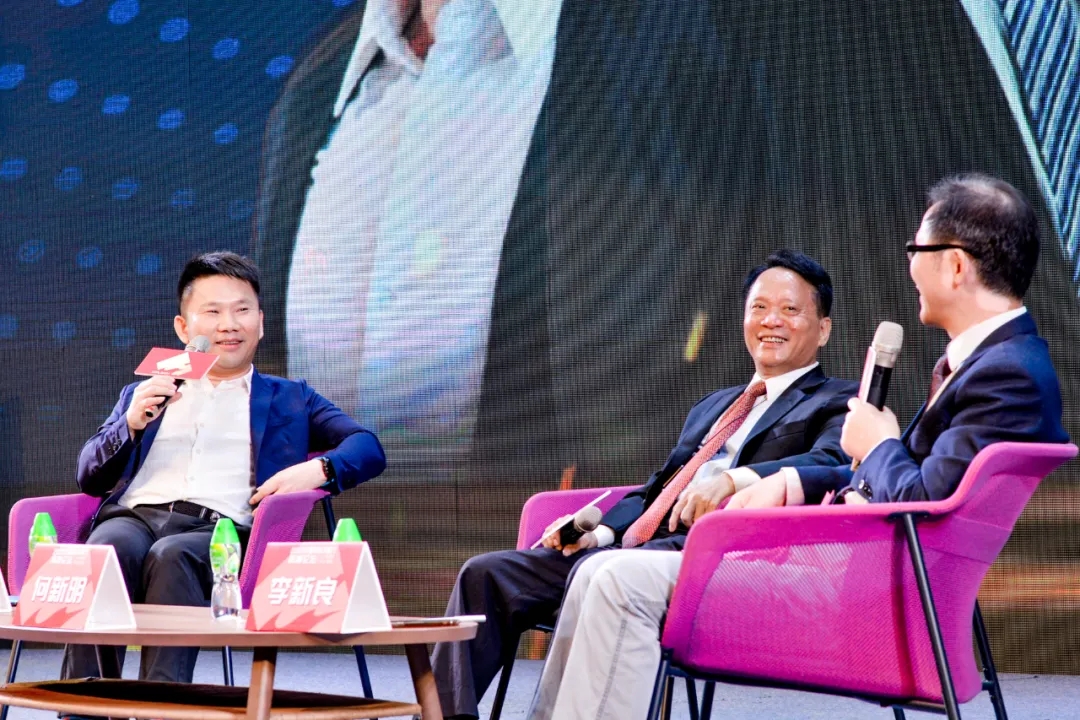 There are 120 enterprises vying for 36 awards in the 16th CCPL, including the leading ceramic tile, sanitary ware and machinery enterprises in China as well as abroad. Multinational companies like ICC and Xaar also participated in the contest. Xaar won the Award for Technological Innovation with its 2001+ printhead and ICC won the Annual Product Award for its Loft Pro series ceramic tiles.

According to Samuel Tam, the general manager of Xaar’s Asian branch, Xaar’s internal circulation technology was unique in the printhead industry. The 2001+ printhead of Xaar won the technological innovation award by its capability of high ink loads and viscosity. Samuel said in the future, Xaar would continue the research and development in the field. 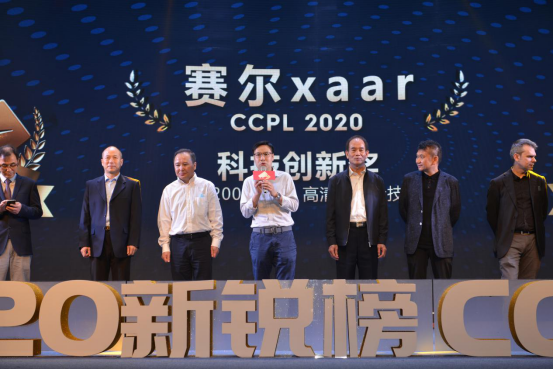 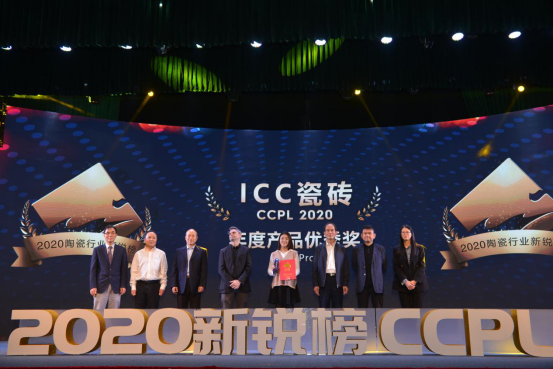 15.1% More Enterprises from Outside Guangdong Participates

The jury of CCPL and the honored guest Danilo Trevisan presented the awards and certifications to the winning enterprises. Mr. Huang Xinhong, the chief judge of the jury said the 16th CCPL had 15.1% more enterprises from outside Guangdong Province participating despite the influence of the pandemic. The results of the CCPL came from the jury’s thorough field investigation in the four major ceramic producing provinces, Guangdong , Fujian, Jiangxi and Shandong. The jury combined the past achievements of the participating enterprises and their future plans, the test data and the overall quality of the products for the evaluation. 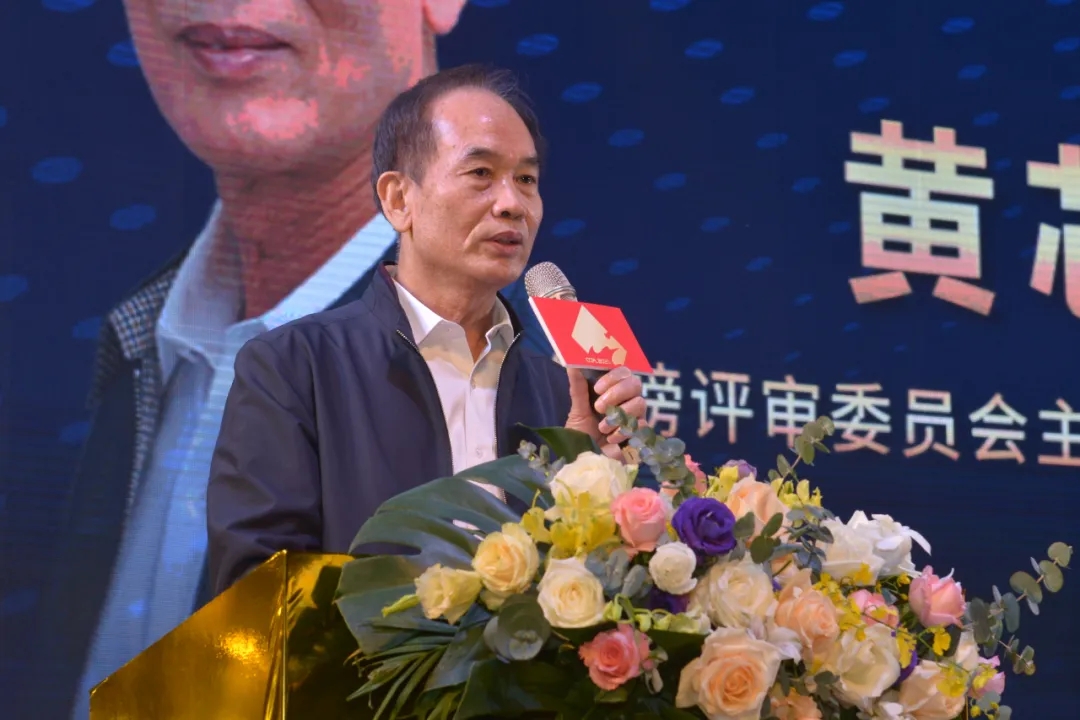 “This event is not only good to promote the industry, but also keep up the spirit in this kind of difficult moment. If we all make a little change at home, in Italy, in China and other places all over the world, things will be in a different way and restart will be ready maybe in just a few months.” said Danilo Trevisan, an Italian architecture designer and the honored guest of the event. 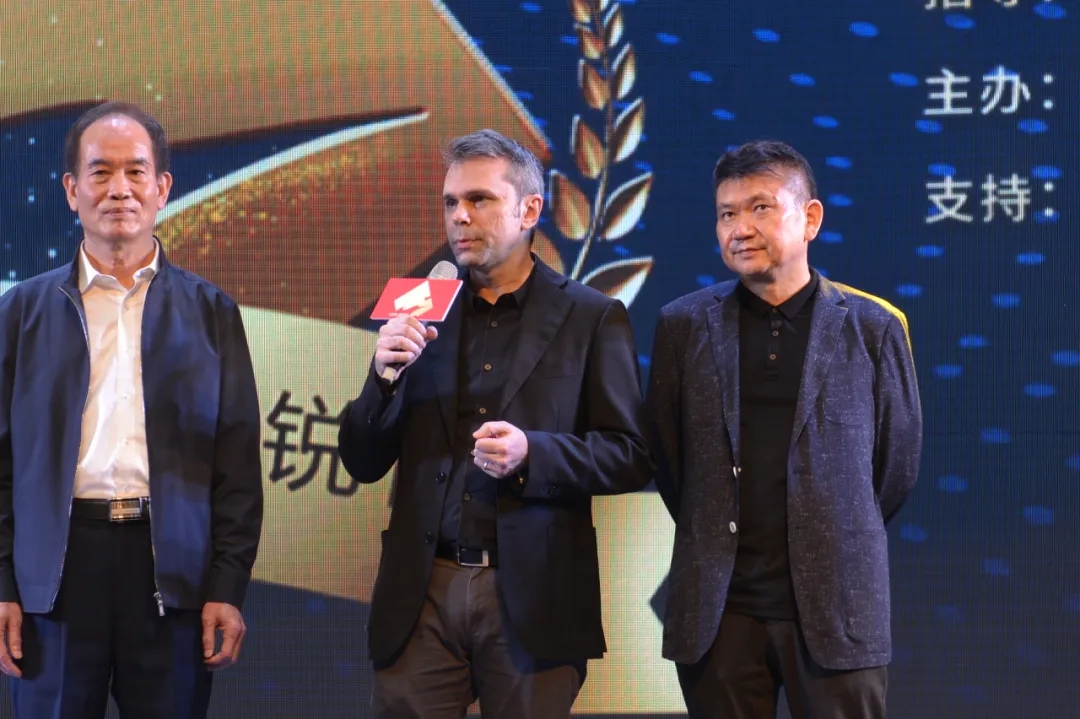 The most expected award in the event, the Gold Earth Award, was won by Keda Clean Energy, a listed company that focuses on building materials machinery. The Gold Earth Award only goes to the individual or the enterprise or a product that brings major revolution in the industry, and the award has been vacant for two consecutive years. Since 2016, Keda has invested and built four ceramic producing bases in Kenya, Tanzania, Ghana and Senegal and the fifth one in Africa is currently under construction. Keda Clean Energy hence also won the Award for Exploring Overseas Markets.

Mr. Zhong Yingzhou, Deputy president of Keda, came to accept the awards. “With such little weight of the trophy, the expectation is enormous. Keda appreciates the opportunity given by the ceramic industry and will invest more resources in the aspects of globalization and digitization in the industry. We will make our part of contribution to enhance the level of Chinese-made manufacturing equipment.” 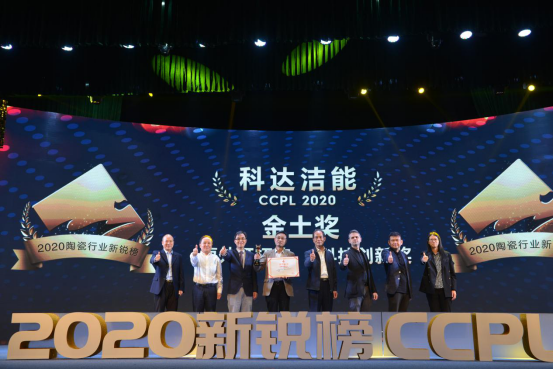 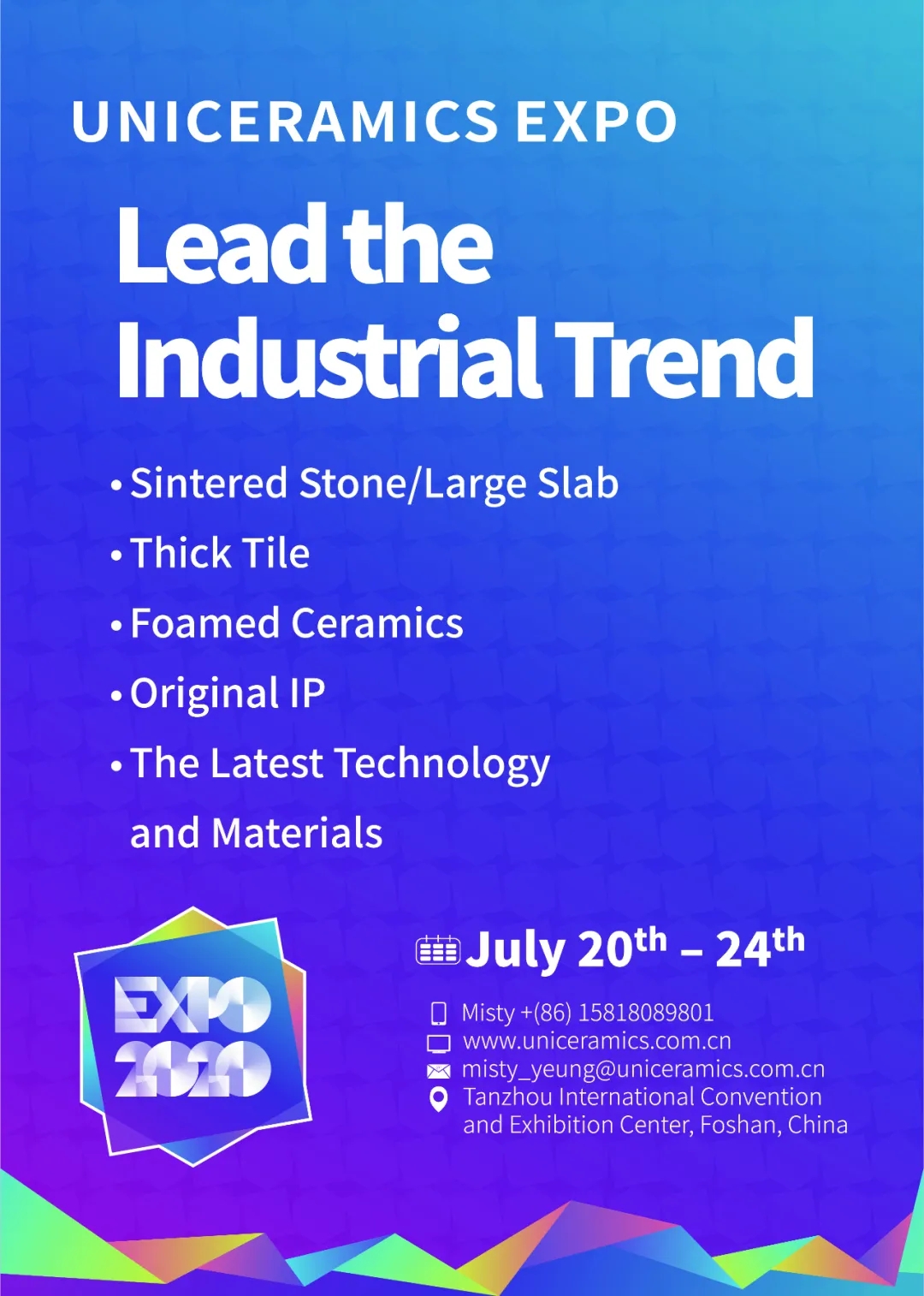