Compared with 2016, both import volume and value of imported tiles increased in 2017. According to the Customs data, the total import volume of ceramic tiles reached 6.0611 million dollars, with year-on-year growth of 23.76%; while the total import value soared to 126 million dollars with year-on-year growth of 42.21%, achieving the highest level in nearly a decade.

The Customs data showed that the top ten countries exporting tile to China were Italy, Spain, Malaysia, Germany, Turkey, China, Portugal, Japan, Indonesia and Britain in 2017. The import value of Italy and Spain amounted more than 90% of the total. 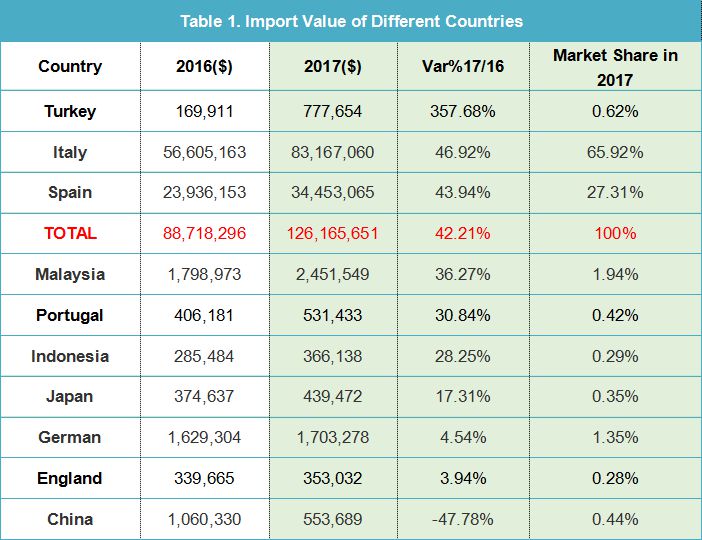 According to the import growth rate, among the top 10 countries importing tiles to China, the import value of Turkey, Italy, Spain, Malaysia, Portugal and Indonesia increased significantly, with growth rates respectively were 357.68%, 46.92%, 43.94%, 36.27%, 30.84% and 28.25%. Among which Turkey moved up to the fifth place from outside the top ten last year in the China’s ceramic tile import ranking.

On the contrary, Fujian,Tianjin, Sichuan and Guangdong achieved positive growths,with growth rates respectively were 431.85%, 120.69%, 83.62%, 68.18%. Among which Fujian moved up from outside the top ten to the sixth place, Tianjin moved up from the seventh place to the fifth place..